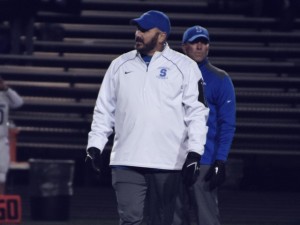 Mike Fisher is the founder and owner of Triton QB Academy, located in Huber Heights, OH. The Academy provides coaching instruction to individuals and small groups. Services are offered to aspiring quarterbacks from the Miami Valley and surrounding areas at junior high, high school and college levels. Coach Fisher has worked Elite 11 regional camps in Columbus, Ohio and Chicago, Illinois for the past 4 years and at Rivals series camps in Cincinnati, Ohio for the past 2 years.

A graduate of Wayne High School, Coach Fisher, was a starting quarterback during his junior and senior years and also played collegiately in Ohio, at Kent State University and Wilmington College. Many of his philosophies are centered around the way he was taught from an early age and which continued throughout his college career and continues today with the other coaches he works closely with throughout the country.

Coach Fisher has worked with many talented quarterbacks since starting his high school coaching career in 1999. He has coached three 1st team All State QBs (John Szabo, Jeff Zolman, Alex Earley). Alex Earley was also named as Division I Offensive Player of the Year in 2005 for the State of Ohio. Other notable quarterbacks Fisher has worked with are Elijah Cunningham – Springboro High School quarterback and BGSU commit, Jacob Harrison – Centerville quarterback and US Naval Academy commit, Hunter Fentress – Clinton Massie 2013 Division 4 State Champion quarterback, and Messiah DeWeaver – Wayne High School and Michigan State University commit. Four of the top five quarterbacks and five of the top ten passing leaders in the Greater Western Ohio Conference during 2015 have trained with Coach Fisher.

As much as Coach Fisher loves football, he considers his family, his wife Laura of 11 years, daughter Mya (9) and son Dane (5) as his greatest accomplishment.